Let’s understand it through some example code.

On building, compiler returns the error:

Go is highly focused on faster compile time rather than speed of execution (even willing to sacrifice some run-time performance for faster build). The Go compiler doesn’t spend a lot of time trying to generate the most efficient possible machine code, it cares more about compiling lots of code quickly.

Allowing cyclic/circular dependencies would significantly increase compile times since the entire circle of dependencies would need to get recompiled every time one of the dependencies changed. It also increases the link-time cost and makes it hard to test/reuse things independently (more difficult to unit test because they cannot be tested in isolation from one another). Cyclic dependencies can result in infinite recursions sometimes.

Cyclic dependencies may also cause memory leaks since each object holds on to the other, their reference counts will never reach zero and hence will never become candidates for collection and cleanup.

Robe Pike, replying to proposal for allowing import cycles in Golang, said that, this is one area where up-front simplicity is worthwhile. Import cycles can be convenient but their cost can be catastrophic. They should continue to be disallowed.

The worst thing about the import cycle error is, Golang doesn’t tell you source file or part of the code which is causing the error. So it becomes tough to figure out when the codebase is large. You would be wondering around different files/packages to check where actually the issue is. Why golang do not show the cause that causing the error? Because there is not only a single culprit source file in the cycle.

But it does show the packages which are causing the issue. So you can look into those packages and fix the problem.

To visualize the dependencies in your project, you can use godepgraph, a Go dependency graph visualization tool. It can be installed by running:

It display graph in Graphviz dot format. If you have the graphviz tools installed (you can download from here), you can render it by piping the output to dot:

You can see import cycle in output png file: 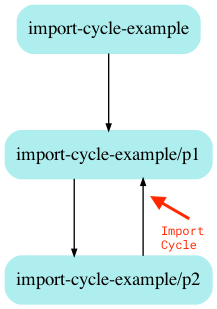 Apart from it, you can use go list to get some insights (run go help list for additional information).

You can provide import path or can be left empty for current directory.

When you encounter the import cycle error, take a step back, and think about the project organization. The obvious and most common way to deal with the import cycle is implementation through interfaces. But sometimes you don’t need it. Sometimes you may have accidentally split your package into several. Check if packages that are creating import cycle are tightly coupled and they need each other to work, they probably should be merged into one package. In Golang, a package is a compilation unit. If two files must always be compiled together, they must be in the same package.

That’s how package p2 ignores the existence of package p1 and import cycle is broken.

You can use this code in main package to test.

Other way of using the interface to break cycle can be extracting code into separate 3rd package that act as bridge between two packages. But many times it increases code repetition. You can go for this approach keeping your code structure in mind.

Interestingly, you can avoid importing package by making use of go:linkname. go:linkname is compiler directive (used as //go:linkname localname [importpath.name]). This special directive does not apply to the Go code that follows it. Instead, the //go:linkname directive instructs the compiler to use “importpath.name” as the object file symbol name for the variable or function declared as “localname” in the source code. (definition from golang.org, hard to understand at first sight, look at the source code link below, I tried solving import cycle using it.)

There are many Go standard package rely on runtime private calls using go:linkname. You can also solve import cycle in your code sometime with it but you should avoid using it as it is still a hack and not recommended by the Golang team.

Point to note here is Golang standard package do not use go:linkname to avoid import cycle, rather they use it to avoid exporting APIs that shouldn’t be public.

Here is the source code of solution which I implemented using go:linkname :

The import cycle is definitely a pain when the codebase is large. Try to build the application in layers. The higher-level layer should import lower layers but lower layers should not import higher layer (it create cycle). Keeping this in mind and sometimes merging tightly coupled packages into one is a good solution than solving through interfaces. But for more generic cases, interface implementation is a good way to break the import cycles.

I hope you got a fair understanding of Import Cycles. Do share and reach out to me on Twitter in case of anything. You can follow my open source work at github/jogendra. Thanks for read :)